Rwanda is a country located in central east Africa, it is bordered by Uganda, Burundi and Democratic Republic of the Congo. Rwanda is in the Africa Great Lakes region, the country is surrounded with mountains in the west and grassland to the east, with numerous lakes throughout the country. The population is approximately 11 to 12 million people. Rwandans form three ethic groups, Hutu, Tutsi and Twa.

The country was divided into three ethnic groups, the Hutu who made up eighty five percent of the population, the Tutsi who made up fourteen percent and Twa who only one percent of the total population. The Hutu group dislike the Tutsi people because they(Tutsi) had been blamed of all of Rwanda’s social economic , and political pressures since the early 19oo’s. Although Hutu were the largest ethnic group, tutsi took roles in responsibility by the Germans because of their European look such as lighter skin and taller built. At the end of World War I when the Germans lost the war the Belgians took over Rwanda. In 1933 the two ethnic group must have an identity card label them either Hutu or Tutsi. Belgians also give the Tutsi all the leadership position but this upset the Hutu. Rwanda was struggling to have independence from Belgium, so they switch the leadership role from Tutsi to Hutu and this upset the Tutsi.

On April 9, 1994 the Hutu Rwandan president plane was shot down and immediately afterward violence broke out. The Hutu rebels used radio as a plan to tell their Hutu listeners that Tutsi had kill the president. The radio was the best thing of communication for the Hutu’s because they were very cheap, could be shared by many people, and unlike the newspaper could be listened to and understood by those who were illiterate. By mixing hate messages in with popular African cultural music the Hutu rebel’s were able to turn people against their neighbours. The radio communicated to all Hutu’s, either kill all the Tutsi’s or either we or they will come and kill you. Hutu’s were lead to believe through messages on the radio that the Tutsi were evil cockroaches who would trick and manipulate you so they could rise to power and destroy all Hutu people. Although it has never been determined who was truly responsible for the assassination. The rebels begin to take over the government and blamed the Tutsi for the assassination, and the massacre begun.

The killings began in Rwanda capital city of Kigali. The Hutu citizen were setting up road blocks. to check identification card and killed all those who were Tutsi. Over the next few days and weeks, road blocks were set up everywhere around Rwanda. Most of the killings was done with machetes, clubs and knives as gun were too expensive. The violence spread because the government who is controlled by Hutu rebels had the names and addresses of nearly all Tutsi living in Rwanda. Also during the violence thousands of Tutsi women were raped. Some were raped then killed others were kept as sex slaves for weeks. Some of the victims were given the option of paying for a bullet so that they’d have a quicker death.

This genocide was carried out entirely by hand, often using machetes and clubs, the men who’d been trained to massacre were members of civilian death squads.

Thousands of Tutsi tried to escape the killings by hiding in churches, hospitals, schools, and government offices. These places, which historically have been places of refuge, were turned into places of mass murder during the Rwanda Genocide. One of the worst massacres of the Rwanda genocide took place on April 15 – 16 at one of the churches. The mayor of the town, a Hutu ethic told the Tutsi people to make refuge inside the church by telling them that they would be safe there. Then the mayor betrayed them to the Hutu rebel’s. After the message from the the mayor, the Hutu rebel’s send people to churches and the slaughter begin. The killing started with grenades and guns, but after low in supply of bullets they changed to machetes and clubs. Killing by hand was very tired, so the Hutu’s took shifts. It took them two days  to kill the thousands of Tutsi who were hiding in Churches. Most of the massacres were similar, with many worst ones happened between April and May.

The genocide lasted about three months, RPF (Rwanda Patriotic Front) was reinforced by Uganda’s army, finally occupied more territory, until 4 July, when the forces march its way to the capital of Rwanda, Kigali. Around 2 million Hutu perpetrators, their families and supporters, and anyone else who feared reprisals, even being Hutu, fled the country, half of the Hutu ethnic group went to Congo. Between 800,000 to 1,000,000 Tutsi were murdered during the 1994 Rwandan Genocide. After the genocide, across the country, in thousands of town and villages, the population is taking part in an experiment in recovery which touches every area of life. Homes, roads and community facilities are being re-built. Almost every adult in Rwanda are been part of the community justice process to deal with genocide crimes, and there popular interest in hearts and minds concepts like healing, forgiveness and reconciliation.

This person here is  Francois Bymana he is a very lucky person to escape the genocide in Rwanda. He is a hybrid parentage, his father was Hutu and mother is Tutsi.  After the Rwanda Genocide happened, most of his family members were killed.  Bymana was so lucky, he was not at home in that night. Bymana says acting saved his life, a split second decision to pretend to be from somewhere else, and affect a Zairian accent, very likely kept him alive when, in 1994 his country Rwanda turned into a slaughter house. He speaks five different languages, used his dialect skill to talk his way out of Rwanda into the refugee camps of Zaire.

Bymana has written, directed and acted in a production in 2011 and he is now currently studying in Unitec’s Performing and Screen Arts Department. As a musician and actor of Rwandan descent, now living in New Zealand he bring with him a life history that directly informs his art practise and a lot of fantastic performance immigrate together to New Zealand.  One of the performances is ‘The Thousands Hills’ is the performance based on real story, which is about the Rwandan genocide in 1994. (Dionne. C, 2011)  Except the genocide story there also pass the attitude about happiness, the new opportunity of the life and the love between relations.

A Thousand Hills is the visceral and confronting story of Francois Bymana, a survivor of the 1994 Rwandan genocide, and the New Zealand Red Cross volunteer, Bob Askew, who helped him escape to New Zealand from a refugee camp in Zaire close to the Rwandan border. Bymana character is called ‘Phillippe’ in the play, the play opens with African drumming, lead by Yaw Boateng, and song, which are at once lively and haunting, before Phillippe begins his story. The setting moves back and forth between the refugee camp in Zaire and Phillippe’s village in Rwanda, where he grew up and where he was suddenly plunged into the nightmare, during which his loved ones were all killed and he just escaped the massacre in the night. 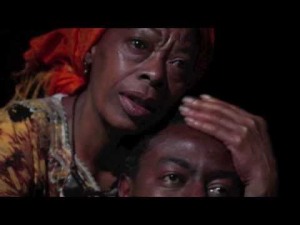 There are numerous scenes like where the two men go exploring  caves searching for underground streams are gripping. It takes just minutes to convey the myriad obstacles they face. “Music is often used to divide up dramatic stories, giving the audience a chance to pause, consider what they’ve seen and ready themselves for the next scenes.”

“Hotel Rwanda” is movie directed by Terry George, tells how Paul Rusesabagina protected 1,269 people who took refuge in the Hotel Mille Collines. “Hotel Rwanda” shows less killing and mainly focuses on the uplifting story of an ordinary man who is known as a heroic profile under the most frightening moment. “Hotel Rwanda” also describes the difficult position of peacekeeping forces when they are not supported by the U.N. The movie shows the beginning of the terrifying moment of the Rwandan genocide.

Nachtwey, James. “When the world turned its black: James Nachtwey’s Reflections on the Rwandan Genocide”.TimeLightBox. 04/06/2011.18/06/2014.<http://lightbox.time.com/2011/04/06/when-the-world-turned-its-back-james-nachtweys-reflections-on-the-rwandan-genocide/#1&gt;